Last Thursday 4 July (fortuitously coinciding with Independence Day in the USA), the EU Bar Association of Ireland held a panel discussion on “Cross Border Practice of Law in Ireland and the UK”. The panel was chaired by the Honourable Mr. Justice Barniville, and the other distinguished panellists were Hugh Mercer QC, Michael Bowsher QC, Niamh Hyland SC, Paul McGarry SC, and Ken Murphy, Director General of the Law Society of Ireland.

The event took the format of a relaxed, panel type discussion rather than individual presentations. Hugh and Michael began by proceeding  to give a brief description of the kinds of cross-border work they have done in their careers. These matters often involved international legal issues, for international clients who could effectively choose any jurisdiction in which to structure their legal affairs and related disputes, but who chose London and English lawyers. The point was made that the types of international work discussed by the English QCs was slightly different to the international work that many at the Irish Bar currently do – which is largely focused on EU or international issues in Irish cases, for Irish clients. One of the panellists remarked that it would be interesting to see if any of the more international work, in particular with EU law aspects, comes to Ireland post-Brexit.

Discussion then turned to the Brexit-shaped elephant in the room. Ken talked about the impact on the solicitor’s profession. He noted that internationalisation of practice for solicitors is currently driven heavily by Brexit. Since 1 January 2016, over 3,000 solicitors from England and Wales have come onto the roll of solicitors (making up c.15-16% of all solicitors on the roll), of whom c.700 have actually taken out practising certificates. He said that these numbers are rising as Brexit approaches. Despite these numbers, very few firms have actually established offices in Ireland, however, with the likes of Covington, DLA Piper and Pinsent Masons being notable exceptions. None of the panellists foresee major global law firms coming in and taking all the work, as the Irish market is well served by established firms, and personal connections matter in the market.

Many of the new practitioners on the roll are focused on the area of EU law, and are worried about their rights of audience and privilege for EU clients (particularly in the context of competition law enforcement by the EU). It was suggested that this is a risky approach for them, and in time the EU Commission is likely to challenge privilege claims by lawyers based in England and Wales, but purporting to practice under Irish practising certificates. The Law Society is taking the line that this is entirely a matter for individual solicitors, and they are not advising them one way or the other.

Ken noted that at present we effectively have mutual recognition with England and Wales for solicitors, and thus it is a low administrative burden for solicitors from there to come onto the Irish roll.

With respect to barristers, presently it is a relatively straightforward process to cross-qualify and get called in England and Wales, with automatic recognition of professional qualifications under various EU Directives. The requirements are that you have been in practice in Ireland for 3 years, after which you apply to the Bar Standards Board which provides a certificate of exemption, and then you get called by one of the Inns of Court. Around 300 Irish barristers are already members of the UK Bar, with a particular Irish connection with Middle Temple. Calls take place 3-4 times a year, and there is a call on 10 October to Middle Temple (prior to Brexit).

Hugh suggested that even in the event of a hard Brexit, the Bar Standards Board is relatively pragmatic, and any new recognition requirements will be proportionate, so there shouldn’t be high barriers if you are from a similar jurisdiction e.g. Ireland. There are even discussions at the moment about possible mutual recognition with other Common Law Bars, much in the way that there is automatic recognition between France and Quebec.

With respect to the Northern Irish Bar, Paul noted that there is de facto recognition between both Bars. There was a mass call in both jurisdictions recently, although this may not be strictly necessary.

Getting work in the UK

Some chambers in the UK have a programme of door or associate tenancy for foreign lawyers, but the situation is different if you actually want to practice in England and Wales, since you would then need a practising certificate (and be obliged to comply with the Bar Standards Board rules, have adequate Professional Indemnity Insurance etc.).

Our English colleagues noted that Chambers don’t recruit actively at the moment for door tenants; while post-Brexit they might start recruiting more, getting these roles in Chambers is mostly down to personal connections. In addition, a lot of work in these international areas (e.g. EU) is self-generated rather than coming from clerks in Chambers, so Chambers aren’t a route to this work in the UK necessarily. When applying to work for or with a Chambers, you have to represent a clear value proposition for them and bring something to the Chambers.

Hugh’s advice to younger colleagues looking to get involved in international work was to join groups that focus on EU and international issues, and from there build expertise and contacts which will often lead to a break into that kind of work.

Panellists remarked that the nature of Irish cases is becoming more international, referencing the Quinn and Madoff litigations. This trend is likely to continue, with the example of data protection cited; the Data Protection Commissioner in Ireland has at least 20 investigations open, some into the largest tech firms in the world. Dealing with this type of litigation requires a lot of collaboration between Irish and US lawyers.

After Brexit, certainly some of the international work currently done in London may move, for instance in the area of financial services (new International Swaps and Derivatives Association Master Agreements now exist under Irish and French law, and not just English and New York law). Ireland has some advantages in the competition to attract that work: it has a good regulatory system that generates reasoned decisions, and litigation; the English language helps; and the courts provide good, transparent and reasoned decisions.

From the floor, Colm Ó hOisín SC talked about the role for Ireland in international arbitration, and international litigation more generally. He suggested that Ireland has been generally more inward-looking in the legal sector, with a focus on the Irish market and Irish clients abroad, and not outward-looking like other areas of the economy. The English Bar has been very successful at getting international work, and the Irish Bar should be better at it. It has the capacity and capability to do it, but it doesn’t have the structure, and he suggested that the lack of Chambers here was a disadvantage. The Irish Bar, and in particular its younger practitioners, needs to step up to the opportunities presented by Brexit.

The event concluded with a plug for the upcoming European Circuit Conference taking place in Rome in September (details available at: www.europeancircuit.com), followed by drinks in The Sheds.

The evening provided a lively discussion with some fascinating insights into cross-border practice, and in particular the potential implications of Brexit for the legal sector here. 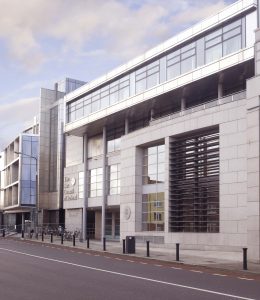