[Note: This article was initially published in In Brief.]

On 23 May this year, the European Circuit hosted a successful Brexit panel discussion event at Manchester’s Civil Justice Centre, drawing in an audience of over a hundred lawyers who crammed into a packed Court Room 47 on a sunny Thursday afternoon. The event, which was chaired with aplomb by Judge Pearce, involved two panels of speakers talking on various aspects of Brexit and its implications, the first talking about “the bigger picture” and the second about “the practical implications”. It was sponsored by 18 St John Street chambers who supplied refreshments and also by the Manchester Law Library who kindly helped to serve drinks.

Sir Ernest Ryder, Senior President of Tribunals and Lord Justice of Appeal, opened up discussions outlining the mitigation plans being devised by the Ministry of Justice in order to deal with what is anticipated to be the logistical fall-out from Brexit.  Internally, the MoJ appears to be planning for recession-like increases on Court services, with expected spikes also in extradition hearings, family law jurisdictional cases, and a general increase in conflicts of law, administrative law, tax, employment and benefits cases raising all manner of EU legal questions.

Abigail Holt analysed Brexit from the perspective of legal theory, contemplating whether the rejection of the acquis communitaire and the cancellation of rights would leave behind an “imprint” where rights once were. Abigail asked how our flexible common law system, with its tradition for calling on and developing legal international norms, would approach rights which are shorn from the European values dimension and whether we might find ourselves reaching out in new ways for universal legal values to fill the gaps.

Professor Alastair Sutton then gave a potted history of the WTO explaining the challenges of trading on WTO terms outside the EU. No longer a part of the EU block, the UK will suddenly find itself as a very small fish in a very big pond. Worse still, individuals and businesses will not be able to appeal to the arbitration panel of the WTO when faced with any breaches of trade law – only governments can apply, but even that right is being prejudiced right now as the WTO is facing an existential crisis with President Trump’s government recently vetoing the appointment of any new judges. The upshot of that is that the work of the WTO is already grinding to a halt and in real terms there are only three judges remaining, two of whom are due to retire very soon, and no new judges can be appointed.  Having rubbished the idea of dealing on WTO terms, he concluded by commenting that “It would be nice to know what the UK’s trade policy is”.

Michael Dougan, Professor of EU Law at Liverpool University, opened discussions on the second panel, giving a whirlwind tour through the consequences of implementing the European Union (Withdrawal) Act 2018.  He explained how the desire to “take back control” calls for vast amounts of legislative work. His presentation was broad but also dived into some of the detail, including the massive complexity of the ongoing status of the Charter of Fundamental Rights of the European Union post-Brexit. The take-home message was that the project of unravelling our law from EU law is a vast project which will generate massive legal uncertainty for a significant period of time, with the likely consequence that England will become less attractive as a forum for resolution of international disputes.

Gerard McDermott QC then gave pointers in relation to the challenges generated for litigants who suffer accidents abroad. He drew attention to the MIB and highlighted the advantages of the current system which allows litigants to sue foreign European insurance companies, individuals and businesses in UK Courts. He advised cross-border PI litigators to urgently appraise their current caseload and to ensure that any Francovich claims are commenced as a matter of urgency. Gerard pointed out that, in his experience, many citizens still do not realise that compensation for accidents suffered at work, whilst driving or on holiday abroad are going to become very much more difficult, if not impossible, to pursue post-Brexit.

Dr Michael Wilkinson then looked at some of the implications of Brexit on contracts. Whilst at first glance, Brexit does not look set to greatly affect domestic contract law, it does throw up some serious issues for choice of law and choice of jurisdiction clauses, as well as wider contractual practices.  Cross-border lawyers now drawing up a 5-year supply agreement contemplating an English-law-English-Courts clause, for example, will have pause for thought as at the moment they have no idea whether a judgment obtained in England on such a contract in say 3, 5 or 8 years time will even be capable of being enforced across the EU. He questioned whether England will lose its pride of place as a forum for disputes, pointing to competition in legal services overseas with Courts in Holland, Belgium, Germany and France setting up new courts operating exclusively in the English language and some exclusively in English law – such the International Chamber of the Paris Court of Appeal. He questioned also how far traders and lawyers might re-incorporated EU law into contracts by reaching substantive agreement requiring compliance with the acquis notwithstanding Brexit.

Finally, Hugh Mercer QC articulated the problems generated by Brexit for the recognition of foreign Judgments in the UK and, perhaps more importantly for us, the recognition of UK Judgments abroad. The current intra-EU system is complex, but is settled and functions effectively. “Taking back control” of our law means a loss of confidence, if not control, in enforcing Judgments. Hugh also highlighted the problems which will be created if UK professional qualifications are no longer recognised, whether legal or those of other professions.

This event was kindly sponsored by 18 St John Street chambers. 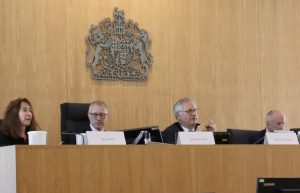 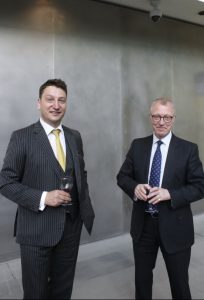